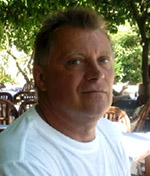 Igor Savin was born on 29. july 1946. in Zagreb from mother ballet dancer and father composer. His early life he  spent in Osijek. In the year 1967. he came back to Zagreb to study piano and composing in Music Academy of  Zagreb and Berklee, Boston corresponding jazz academy.He founded numerous ensembles with which he toured the  Mediterranean and European countries and also Cuba in 1978.As composer, pianist and multi-instrumentalisit he  composed and performed in various symphonic orchestras, big bands, jazz fusion groups and orchestras and  ensembles for TVand movies, both live and as producer in studios. Igor Savin founded “Vatroslav Lisinski” Concert  Hall Zagreb Electronic studio where he composed music both synthesizer and acoustic since 1984.
For purposes of music production for film, theatres, stage performances and commercials he founded his own  digital studio in Zagreb.Igor Savin composed over 800 music pieces of which 165 for the movie, 65 for the theater, 14 for the ballet. He is author of 1500 arrangements for jazz ensembles and symphonic orchestras and over 200 commercials and short introductions.He joins Modo Novo ensemble in 1998. as pianist with which he performed arrangements of traditional folk , church songs and works of Erik Satie. He held over 70 concerts of ensemble Modo Novo.Currently lives and works in Zagreb.