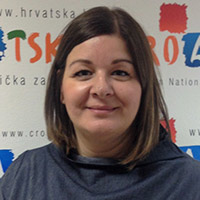 Slavija Jačan Obratov was born in Zadar. She got her journalism degree from the Zagreb University Faculty of Political Science.

Her career in tourism began at the Head office of the Croatian Tourist National Board where she still works. From 2000 to 2002 she was Head of the Information Department and between 2002 and 2013, Head of the Communications and Publishing Department. She ran the Destination Support Department until March 2016 when she was appointed Director of Destination Management and Product Development Support Division.

Through years of working in the publishing and production fields, Slavija and her team put through numerous projects that theCroatian National Tourist Board received recognition and awards for, such as the Red Dot Award in 2004 and 2009; Best of Show / HOW Design 2005, Best CREATIFS 2012, the ADI Design Award, Poster Annual 2011 / Graphis, Taiwan International Design Award 2009, Das goldene Stadttor ITB Berlin / 2012, the Karlovy Vary Tourfilm Festival in 2010 and 2012, Grand Prix Lecce 2012, 1st prize Zagreb Tourfilm Festival and many others.

Slavija Jačan Obratov was editor-in-chief of the oldest Croatian international interdisciplinary journal “Tourism“ between 2003 and 2013.