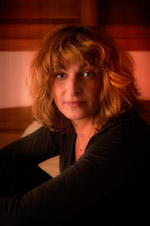 TANJA KANCELJAK was born in Zagreb in 1966 and holds a Degree in Journalism by the University of Zagreb  and started work as a radio reporter on Radio 101 in 1987.
In 1992 was taken on by Croatian Television as a reporter, working on many programs. 13 years later, Tanja started  a career producing documentaries for Croatian Radio Television, writing screenplays and directing documentaries,  some of them award -winners.
After attending educational workshops, seminars and forums on documentaries and media, abroad, organized by  different Institutions (Croatian Radio Television, France 3, BBC, Discovery Channel – Almost Real in Munich,  ERNO, Tromso University and the European Documentary Network, Tanja also participated and was an observer in  some documentary pitching forums (Thessaloniki, Greece; Tallinn, Estonia; Bergen, Norway).